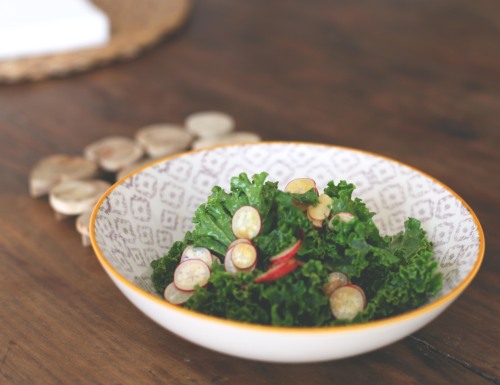 kale kale kale, I could scream from the top of my lungs!  Or perhaps the bottom.  I believe that would indeed be the most profound.

I wouldn’t have guessed, but kale is quite hard to come across in France.  I have the luxury of having a very decently priced little organic market down the street from me.  They never let me down (they even half priced the berries I was buying once as the manager said he tried them and they weren’t sweet enough.  He’s tough public, because I thought they were amazing.)

Neither here nor there with the berries, but the kale, yes, the kaaaale, they have it.  It was almost like running into an old elementary school teacher or something, the way I felt when I looked down the aisle towards the produce and saw green bobs of curl brimming from a wooden-laced carton box.

I don’t know what it is about the salad.  My Grandma thought it was a bizarre thing to eat (isn’t that the plant that grows along roads in dirt or for decoration in planters?)  Yes, but a lot of good things do that, too.  And it’s just so weirdly healthy tasting — in a good way.  It’s one of those things you eat for the first time, you like it decently, but I think it’s so good for your body that when your body sees it again it’s automatically conditioned to want it more because of the good it does inside.  Like garlic.

Here’s a really simple recipe for two brilliant ingredients with a 5-ingredient salad dressing that complements the two just too well.  Takes, like, 3 minutes to make.  <3 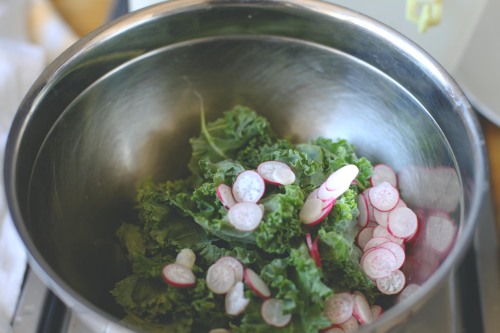 method: Prepare dressing by mixing mustard, agave nectar, and vinegar in a bold until combined.  Slowly whisk in oil to emulsify.  Add soy sauce to taste.  Toss in prepared kale and radish.  Salt and pepper to taste if needed/desired.

*for those with soy allergies, simply salt to taste and don’t add tamari.

I have come to the realization that it takes an enormous amount of energy to do great things.  I’ve heard that once and I hear it now.

Great things come in a grand spread of forms.  Great things are tying your shoe for the first time, overcoming the loss of a parent, turning your creative passion into a full time occupation while trying to make ends meet.  These are great things, and the energy they take is both new and demanding, intense relatively and independently.

If the source of this energy is undefined, the negations of it are certainly not: bad relationships, lack of self love, an imbalance of health.

Health is beyond physical.  It is mental, emotional, spiritual.  It is a type of self love humble and convincing at once.  If we know that a lack thereof deprives great things, and we live in a society obsessed with great things, why don’t we take care of ourselves more?

Kudos to you for visiting a site that cares about health, pleasure, and what we put in our bodies.  Take care of yourself this weekend!  And then share it.  :)

I’ve come to a revelation– I hope to never buy herbs again in the grocery store!  This reality goes far beyond any sort of farm-to-table philosophy and straight into my pocket.  Take note:

Each of these plants cost no more than 3 bucks.  In the grocery store where the herbs will probably die in like 3 days anyways?  One buck less.  And they don’t keep having little herb babies.

Buy your own herb pots!  Even if you have no garden (I surely do not have enough moolaw to afford a garden in this urban landscape) simply keep a few pots of choice in your kitchen next to the window.  These lovelies reproduce more quickly than rabbits.  …which is why I don’t feel bad using the baby leaves to top my tartines with my teff bread.

The jackets are stowed and the tank tops aplenty.  Give your fruit salad some peps by adding fresh basil.

To really infuse the flavors, mix all ingredients 30 minutes before serving.  Today I enjoyed a combination of peach, banana, apple, and blueberry.  The banana adds a luscious creaminess and juxtaposition of texture from the firmness of the blueberries and apple.  The peach is a flavor complement to both blueberries and bananas.  Basil ties this together into something curiously savory and herbaceous.

It’s like a six-year-old girl dressing herself: I am going to put together all of the fabulous things I like and it will work.

Sometimes six-year-olds are surprisingly stylish.  This marinade of everything-I-like would be one of those kids, I like to think.

Finally having a full day to play in the kitchen, I went a little nuts.  I coated peas in wasabi and buckwheat flour and fried them, I homemade sushi, crackers, and chicken liver mousse.  I made a lemon meringue pie from scratch.  I sang while doing all of this, just to make sure that if the neighbors weren’t already disturbed from the sound of blenders and smells of garlic that they had a sure idea of my presence.

I also discovered a marinade.  It’s easy, gluten-free, and has a really nice tang with the combination of wasabi with honey and oregano.  I used it on pork, but it would work on chicken or beef or tofu or seitan.

after a few hours tenderizing 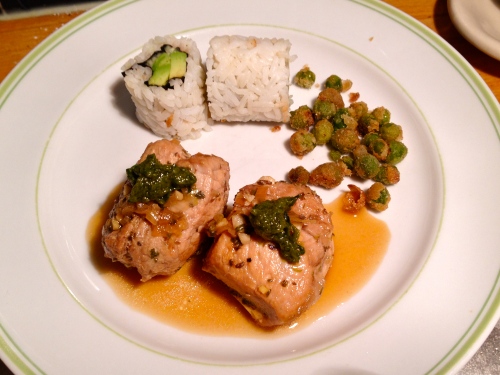 Method: combine all ingredients in medium bowl.  Marinade your protein of choice in sauce for up to overnight, minimum 2 hours, covered.  Turn protein half way through marinating to disperse flavors equally.  Marinade keeps by itself about a week.  Enough to soak enough protein to serve about 3-4.